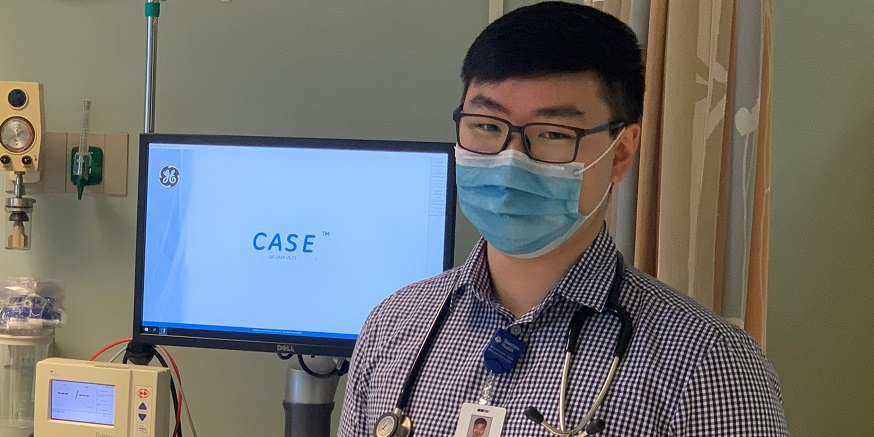 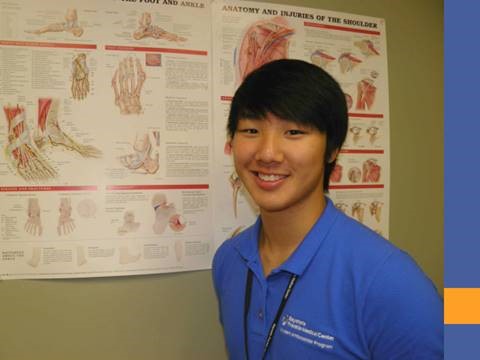 Timothy Kang grew up with parents who suffered many health complications – his father had struggled with heart disease since 2014 and had coronary artery bypass graft procedure when he was just 52 years old – so it wasn’t a surprise to anyone, including himself, when Tim decided he wanted to go into the medical field. His particular interest was cardiology, for obvious reasons.

“As the oldest of my two siblings, I felt a responsibility to help my parents when it came to their doctor's appointments, as they had difficulty speaking English,” he says. “I remember looking for opportunities to expose myself to healthcare as soon as I got my driver's license so I could gain experience and further help my parents through their struggles.”

Tim, now 25 years old, today works at Baystate Franklin as a physician assistant/associate in its Cardiovascular practice. But he’s no stranger, because he’s been volunteering or serving as a student ambassador at the hospital for many years beginning when he was a teenager.

“I Fell in Love with Developing Relationships with Patients”

“I contacted Becky George (Baystate Franklin Manager of Volunteer Services) who brought me in to help out on the Spokes. My responsibilities were centered around anything non-clinical. I restocked gloves, cups, lids, etc. However, my favorite thing to do was bring patients water or ginger ale when they asked for it. This led to my first exposure to talking to patients about their illnesses, lives, and their families waiting for them back home. To make a long story short, I fell in love with developing relationships with patients. I loved hearing their stories and connecting with them. I remember thinking, ‘I can't wait to come back and help them through medicine someday.’ It's still surreal to me that I am in that position now.”

At first, Tim volunteered at Baystate Franklin every week on a regular basis, but it became tougher as the months and years went on because of school. For at least a couple years, he always came back for a shift or two, whenever he found he had the time, even through college. In his senior year of high school, he heard that Baystate Franklin had a Student Ambassador Program in which students shadowed an array of health care professionals in different specialties. His interest in health care was growing, so he thought it would be perfect for him. He applied and was accepted into the program and shadowed nurses, doctors, PAs, NPs, people in IT, imaging technicians, surgeons, just about everyone. He watched them “work their magic” in various settings and even got to “shadow” in the Stress Lab.

“It was awesome - easily the coolest thing I had the opportunity of being a part of at that time in my life. Needless to say, it solidified my desire to be a part of the healthcare world. I was also able to learn enough that I knew that the PA profession was something I wanted to strive for.”

Tim graduated from Pioneer Valley Regional School and attended Massachusetts College of Pharmacy and Health Sciences in Boston for its 3+3 program, where he did 3 years of undergraduate studies in pre-med followed by 3 years of PA school. He admits he was looking at practicing in a more urban area – he didn’t have plans to return to the area.

Coming Full Circle
Then, his girlfriend of seven years told him she wanted to move back to Franklin County. Tim says it took him a few months to give in, but he eventually did.

“Now, I'm admitting that it ended up being the best thing. While looking for a job, I happened to get an email from the team that facilitated the Student Ambassador Program at BFMC. They were asking past participants where they were in life and if they had pursued a career in healthcare. I replied and explained that the Student Ambassador Program was the best thing that happened to me in high-school, and that I had just became a PA. Becky wrote back and helped me get connected with a recruiter. One thing led to another, and I was able to get the job that I have now. I was very excited during the interview process. I loved that I had the potential to work for Baystate, and to return to my roots. Now I wake up every day excited to go to work and wear my badge proudly through the halls and in the office.”

Tim says the beauty of being is PA is that you don’t have to specialize, but that being said, he always wanted to work in cardiology and that’s where he ended up. It struck his interest because of his father’s ordeals with heart disease, among other reasons.

“Since then, my father has been dealing with his comorbidities and struggling to understand the instructions of his providers due to his inability to speak English comfortably. In order to help him to the best of my ability, I have taken a special interest in cardiology.”

There is no “typical” day for Tim at work, at least not yet, he says. He does everything from see patients to stress testing and more. He loves that it’s something different every day. Tim plans to stay with Baystate Franklin for the foreseeable future.

“I'm very happy to be serving the community that I grew up in. I am excited to be working for an organization that helped me fall in love with medicine. Everyone I've met at Baystate Franklin has always been nothing less than supportive of me, and I want nothing more than to be surrounded by that going forward. I have nothing but pride to be practicing medicine for the people of my community and to be working for Baystate Franklin today.”